DEAL UP A DOLLAR

An event every week that begins at 3:00 pm on Saturday, repeating until Saturday December 5, 2020

Deal Up a Dollar is back!

Swipe, Drink or Play for entries!

Be here from 2pm on Saturday 28 November and 5 December to automatically receive your entries just by swiping your members card at the kiosk, buying a drink, or playing the gaming machine with your card inserted.

The last 2 draws to find the last 10 finalists will take place on Saturday 28 November and Saturday 5 December from 3 – 5pm.

Then from 6pm on Saturday 5 December the Game Begins! The 20 finalists will return to see who gets to “Deal Up a Dollar”.

You must be a member and be present at the draws if your name is announced to be a finalist in this promotion. 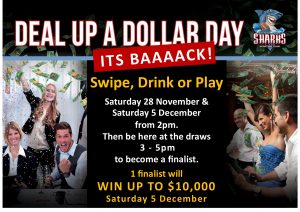 An event every week that begins at 5:00 pm on Thursday, repeating until Thursday December 17, 2020

An event every week that begins at 5:00 pm on Thursday and Saturday, repeating until Saturday December 19, 2020

Eat, Drink, Swipe or Play to automatically be in the draws

Then be here at the Draw times on Thursdays and Saturdays to become a finalist!

Each member drawn on Thursday and Saturdays nights will receive a lovely Christmas Ham, plus an invitation to the Giveaway Day on Sunday 20 December. Includes a hot and cold selection of seafood, plus meats, salads and dessert, drink on arrival and live music! Join us for a night of fun Aussie themed trivia and celebrate all things Australian!

The Bistro opens at 5.30pm, so you can grab some dinner and eat at your trivia table inside the Function Room.

Free to play and lots of prizes and giveaways to win!

Get a few friends together to make up your team.

Scott Geary will be in the Main Lounge playing Aussie tunes until 10.30pm, so you can kick back or have a dance after Trivia. 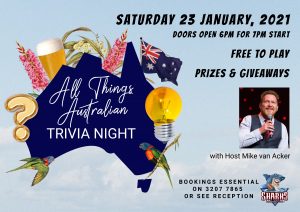 The Beatlegs are the ultimate Beatles tribute show who have been keeping the magic of The Beatles alive since 2008. They have been exciting audiences from across the country by reproducing the iconic sound and look of the Fab Four. With multiple costume changes, superb harmonies and music, The Beatlegs will have you dancing in the aisles and reminiscing as they play hit after hit of those memorable Beatle classics.
Taking you on a journey through the eight year height of the Beatles fame, The Beatlegs begin with that innocent age of the Beatles when Beatlemania was at its peak, and those slick suits and haircuts were as iconic as the music. They will then transform through the iconic Shea Stadium concert and onto that magical mystery era of Sgt Peppers . Then onto the Let it Be and Abbey Road days, with a grand finale of the Roof Top concert.
The Beatlegs show is not just a tribute to the greatest rock’n roll band of our time. It’s also a trip through time , a nostalgic portal back to a time of innocence. It’s a show that appeals to young and old alike. So come together and celebrate the greatest rock phenomenon the world has ever seen and the sounds of some of the greatest songs ever written.
This is the ultimate Beatles tribute show.
You won’t believe your eyes or your ears!
“A Splendid Time Is Guaranteed For All”
Live at the Sharks – Free Show.
Come early and have dinner from [email protected] – open from 5.30pm – Bookings essential 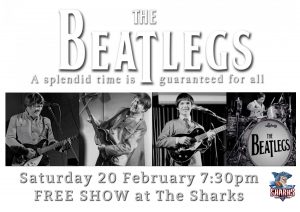 Join us for a night of trivia covering movies, music, celeb couples – all things love and romance.

Lots of prizes and giveaways.

Doors open at 6pm for a 7pm start. 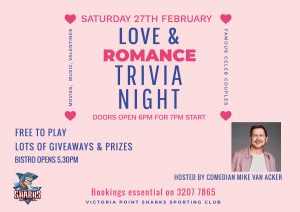 Live Band Karaoke – with “Still Got It” Live Band Karaoke with “Still Got It

Come along and sing in front of the band, listen to the great music, or have a dance.

Watch as heads are shaved to raise money for this worthy cause.

An event every week that begins at 3:30 pm on Sunday, repeating indefinitely

Join us for some fun music trivia on Sunday afternoons in the Main Lounge from 3.30pm.

Its free to play and covers all the genres and decades – some weeks are themed and others cover it all. See how well you actually do know your music and learn a bit along the way. Its free to play, and prizes to be won! And why not stay for dinner afterwards – bistro opens at 5.30pm Straight from London’s West End via the legendary Sydney Opera House, this international sensation is now coming to Victoria Point Sharks Sporting Club in April 2021. Officially the world’s most sought after tribute to the BBC sitcom, Faulty Towers – The Dining Experience is simply unmissable – and ‘outrageously funny’ (BroadwayBaby)!

Become part of the action as Basil, Sybil and Manuel serve up mayhem on a plate alongside a 3-course meal and two hours of non-stop laughter. Expect nothing short of guaranteed fun and a brilliant night out as you climb inside the BBC’s iconic TV show and experience it from the inside out… With over 70% improvised, this is the completely immersive and highly interactive comedy spectacular where anything can happen… and usually does!

Australia born in 1997, Faulty Towers The Dining Experience has been receiving critical and audience acclaim ever since. It’s appeared in 41 countries over the years, and tours constantly in Australia, Europe, Scandinavia and Asia. It also returns for extended seasons every year to Adelaide Fringe, Melbourne International Comedy Festival, and Edinburgh Fringe, and has an ongoing residency in London’s West End. And having recently sold its millionth ticket, it’s clear that this is the most successful interactive comedy show of its kind.

Booking and pre-payment is essential