An event every week that begins at 3:00 pm on Sunday, repeating until Sunday September 29, 2019

An event every week that begins at 3:00 pm on Sunday, repeating until Sunday December 1, 2019

An event every week that begins at 3:00 pm on Sunday, repeating indefinitely

Join us for some fun on Sunday afternoons with Music Trivia at the Sharks. Its free to play, so come along and join in the fun. We give away prizes too, so put on your thinking caps and test your knowledge. All genres and decades are covered, so whatever your music interests or your vintage you’ll know some, and learn some. Hosted by Brett Patman this is a great way to spend your Sunday afternoon. So get a few friends or family together and join us!

Then from 5 – 6pm we have Brett playing live music so you can stay on for a drink and a chat. The bistro opens at 5.30pm so you can stay for dinner if you dont feel like going home to cook! HALF A K THURSDAY

An event every week that begins at 5:00 pm on Thursday, repeating indefinitely

Half a K Thursday

Every Thursday someone will win $500 at the Half a K Thursday promotion!

Just buy a drink or play the gaming machines to receive entries from 5pm.

There are also 3 lovely meat trays to win.

You must be a member, and be here if your name is called to win any of the prizes.

$500 must be won every Thursday night between 6 and 8pm, so make sure you come down for your chance for an easy Half a K 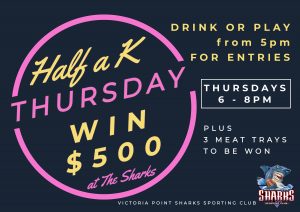 An event every week that begins at 5:00 pm on Thursday, repeating indefinitely

Chance to win 50 Schooners of Beer!

Tickets are $2 a strip

Purchase tickets from the gaming bar from 5pm, and the winner will be drawn at 8.30pm. GRAND IN THE HAND

An event every week that begins at 5:00 pm on Friday, repeating indefinitely

Grand in the Hand

Just buy a drink or play the gaming machines from 5pm to be in the draws, then be here between 8 and 9pm for your After many years and much recognition within the entertainment industry, SoulCutz has fine tuned itself and now comes in many forms. The artists work closely together to perfect their unique sounds ensuring they are always professional and performing at their best.

SoulCutz comes from a floorshow and cabaret-style entertainment background and they are definitely one of the happiest crowd pleasers any audience will enjoy.

SoulCutz can entertain the young and the young at heart with a repertoire spanning 4 decades and has the ability to sound like Barry White, The Bee Gees not to mention the outstanding dance moves that mimic Michael Jackson, James Brown & Elvis Presley to name a few.

Performing live at the Sharks When you think of the 70s, you think of the fashions, the music and the fun!  And records…VINYL records! Classic albums and compilations featuring the hits of the day with titles like ‘Dynamite’, ‘Scorcher’, ‘Choc-O-Block’, ‘Hitwave’, ‘Bobby Dazzler’, and ‘Ripper’ – chock full of great songs.

“Supersonic 70s” is a 100% live music and visual experience that pays tribute to those spectacular Seventies by bringing all those elements together to celebrate simpler times.

Glam it up with hits from The Sweet, T-Rex, Skyhooks, David Bowie and KISS.

Let your inner rocker out with timeless rock classics from bands including Led Zeppelin, Deep Purple, AC/DC and Black Sabbath – live and loud, as the makers intended!

Put on your boogie shoes because those 70s Disco hits are as fresh and funky today as they were at Studio 54…groovy!

It’s a time when music came of age and “Supersonic 70s” wants to take you back, if only for a while, to revisit the fun, the fashion, and the eternal sounds of those musically halcyon days.

You probably won’t have had as much fun since…well, the 70s!

WORLD’S GREATEST SHAVE with “Still Got It”

World’s Greatest Shave with “Still Got It”

Fundraising for the Leukaemia Foundation

A night of music with “Still Got It”, plus watch Jamie (and possibly others) have his head shaved to raise money for the World’s Greatest Shave Fundraiser.

This is your opportunity to sing in front of a live band, or get up and dance to some great music, or just sit back and watch all the fun. 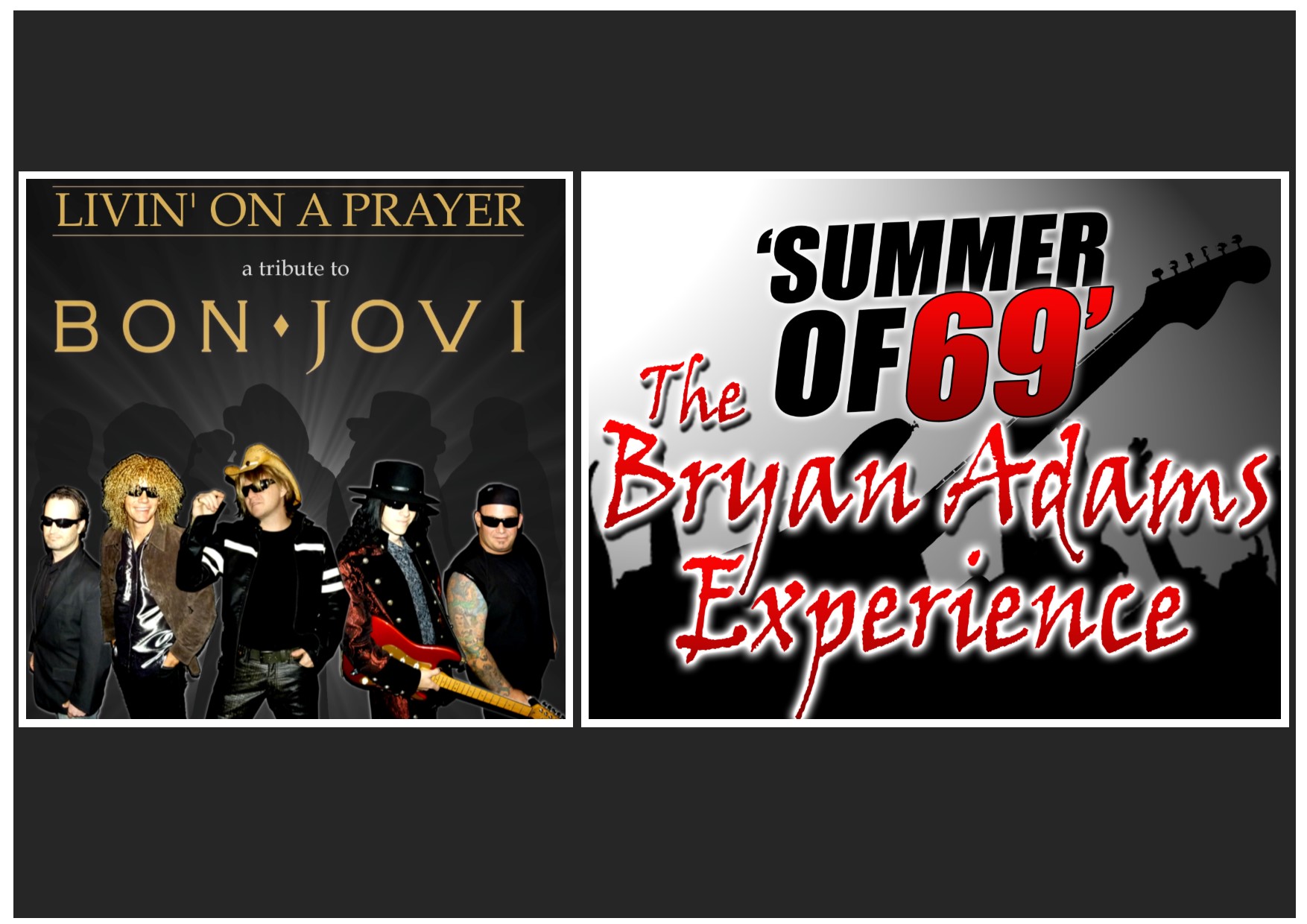 Bon Jovi are without doubt one of the biggest super groups in music history with hits spanning 3 decades since 1984. They are Grammy award winners and in 2018, were inducted into the Rock and Roll Hall of Fame. They have sold over 120 million Albums worldwide have produced 14 Albums with some 25 singles charting. In 2018 they will be completing their 12th world tour performing in 30 counties across the globe. Presenting “Living on a Prayer” the Bon Jovi Show a brilliant homage to the superstar stadium rockers from New Jersey.
All the hits and favourite album tracks faithfully reproduced in a dynamite show full of high octane rock anthems. Bad Medicine, Dead or Alive, You Give Love a Bad Name, Blaze of Glory and arguably the greatest rock anthem of all time, “Living on a Prayer “.
A fantastic stage show, all the searing vocals, mind blowing guitar solos, fabulous harmonies and unmistakeable punchy rhythms are all featured in this show, executed by outstanding musicians dedicated to bring the punter the true Bon Jovi excitement.

Bryan Adams burst onto the world music scene in 1981, taking the world by storm with his fabulous soulful raspy lead vocals, brilliant song writing and huge stadium rock sound.
Bryan’s Second album “Reckless “launched him into genuine rock star status all over the globe reaching Number 1 on Billboard, spawning 6 singles reaching the Top 10 position. If this wasn’t enough in 1990 his album “Waking Up the Neighbours” went to Top 10 on the Billboard Chart The single “Everything I Do, I Do it For You” hitting number 1. With 15 Grammy Award nominations including a win for Best Song Written Specifically for a Motion Picture or Television. Bryan Adams is a true Rock Superstar with over 25 singles released going top ten.
Now, presenting “Summer Of 69” The Bryan Adam Experience, all the hits in a spectacular show
Run to you, Somebody, One Night Love Affair, Heaven, Straight From the Heart, Everything I Do, Summer of 69, and so many more hit songs, delivered by this awesome rockin’ band with Carter Roser as Bryan Adams, lead vocalist so close to the man himself you’ll believe you’re at a real Bryan Adams concert.
All the heart pounding rock Anthems and soulful ballads, which made Bryan Adams a true rock Icon are brought together in this fabulous show.

Free Show at the Sharks.
Friday 3 April from 8pm
Come early for a bite and a drink, then enjoy a night of great music!