Come along and hear Garth Brooks’ biggest hits performed by an amazing 6 piece band in the Australian Garth Brooks Tribute Show. If you’re a Garth Brooks fan, be sure not to miss out. 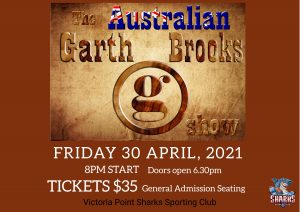 Read about the show:
Australia’s foremost Garth Brooks tribute show presents the greatest hits in modern country music by the biggest selling country rock artist in history.
If you are into country rock music then this show is a must see.
The main course features 2 hours of Garth Brooks biggest hits, with heaps of dancing, singing and all things country, this is a great night out.

Read about the show:

“The band was put together in mid 2016, and after 15 months carefully hand picking the musicians, crew, staging and material we are very proud to announce the arrival of the only “full production” Garth Brooks tribute show in Australia. While choosing musicians for the band, we were very careful to select artists not only capable in their playing ability, but who would also pay due respect to the material in the show. The result is a group of talented, professional musicians with more than 130 years combined experience on stage.
To select material for the show (there is so much fantastic Garth material to choose from) we earmarked approximately 30 of Garth’s biggest hits, being sure to choose a good variety of his music to highlight his amazing writing skills. This show presents some fantastic ballads and even better up tempo dance hits.”
With an exceptional lighting featuring Par wash cans, moving heads, gobos, derby lights, movie projectors and foggers, this show will set the standard for Australian tribute acts. Coupled with a high quality audio rig you will be in for a sound and sight experience.
Garry Hudson: (as Garth Brooks) Guitar and Vocals
Adam Truscott: Bass Guitar and Vocals
Alexis Sawford: Lead Guitar and Vocals
Gabrielle Kerr: Violin and Vocals
Lisa Mason: Keyboards and Vocals
Roger Lewis: Drums and Vocals
Limited tickets are available so book now so you dont miss out!
Phone the Sharks on 3207 7865 or see our reception staff
+ Google Calendar+ iCal Export